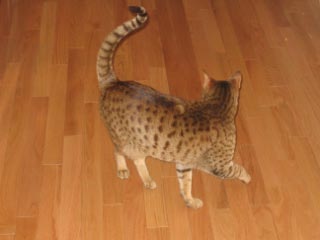 Our house is currently ruled by two ocicats. They are a shorthair breed with spotted markings. Ocicats are known for their intelligence and for their need for human company. As a breed, they are adaptable, good natured, and slightly mischievous.

Hereâ€™s the problemâ€¦ a really smart cat is a dangerous thing. One of our cats, Ushaira, gets into everything. First of all, she steals anything in a plastic container, tub, bag, etc. As an example, she stole a 5lb bag of Starburst Fruit Chews off the top of the refrigerator. She took a bag of toaster waffles out of the groceries, hid them in a closet and shredded the bag. We found the mess a week later. She breaks into the trash, and can open doors if they arenâ€™t tightly latched. And I donâ€™t mean that she just pushes them open â€“ she jumps up, grabs the handle and turns it, and then pushes the door open.

Weâ€™re well trained. We never leave food on any accessible surface and she gets safely â€œtuckedâ€ away while weâ€™re eating if there is anything left for her to lick, steal, or just knock off the counter.

She has her good points. When sheâ€™s not scratching at doors, pilfering food, or chasing her sister around the house, sheâ€™s very loving. She immediately claims the first free lap she sees, whether she knows the owner or not. She fetches. She loves chasing small, bouncy balls, and has an amazing vertical leap. She can catch a ball with her front paws! Oh, and have I mentioned that sheâ€™s about the cutest little thing ever? 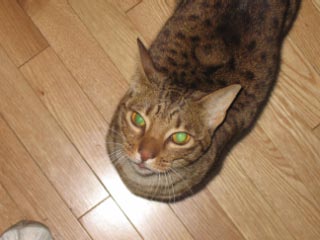 Our other cat, Twirlies, is afraid of everything. She jumps at her own shadow. Other than the fact that sheâ€™s extremely vocal and loves human company, sheâ€™s not really typical of an ocicat. We love her, too, though. And sheâ€™s also very cute!

Youâ€™ll hear more about them as time goes on (and as food goes missing).

More than Mommy is the exploration of the many sides of being a woman and mother. In my case, this includes family, business, home, humor, hobbies, and occasionally politics.

If you're looking for a reminder that you still have a name of your own, you've found the right place! Please post a comment, make yourself comfortable, and maybe learn something new. Parenting is fun, but quite a bumpy ride!