The first thing is that we flew out on August 10, which was right in the middle of the wacky terrorism scare. We flew out of a smaller airport, so security wasnâ€™t so bad (there was no line at all, actually) and other than having me throw out the ice pack I was using to keep Little Guyâ€™s formula cold, we didnâ€™t have any problems. And, yeah, had I thought about it, I wouldnâ€™t have even brought the ice pack, but it just didnâ€™t cross my mind that it would be an issue. Anyway, that was no big deal.

The problem was the weather in Philly. We ended up two hours delayed out of Manchester and then two hours delayed out of Philly. I have a very calm, go-with-the-flow child, but even he started to lose it by the end of our 14 hour travel saga. Our friends have a toddler and she didnâ€™t do well at all. Donâ€™t get me wrong, sheâ€™s a very well-behaved child, but after several hours of sleep-deprivation and being trapped in a stroller or carseat, she was a mess. We landed in Las Vegas at 2am (5am our time) and got to our hotel around 4 by the time we got luggage, car, checked in, etc. It turns out that we had been upgraded to a gorgeous suite. The Panorama Suite at the Aladdin hotel, if any one is curious, is over 1200 sq ft and normally $439 a night. 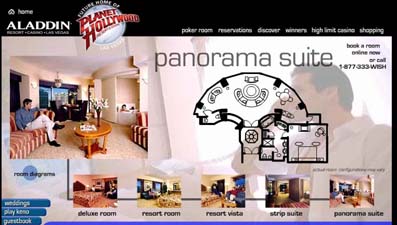 Anyway, we were there in our wonderful suite for about 6 hours before heading to lunch with our friends and driving over 3 hours to Springdale, UT. We were late for the rehearsal/welcome dinner, but it was so nice to see all of our friends there already when we arrived. I was a zombie by that point, so when we checked in, I offered to stay in the room with Little Guy, while Big Guy went to catch up with his friends. Plus, we had free internet access, so I got to check my mail. =}

The wedding was beautiful, albeit hot. The national park was in the background and the bride and groom both looked so happyâ€¦ we all cried, he cried, she cried. Thatâ€™s the sign of a good wedding ceremony to me â€“ if people are moved to tears (and not because they think youâ€™re making the biggest mistake of your life). We had people bawling at ours, so I was pleased! Anyway, everyone was drawn to Little Guy, who apparently looks like he wants people to pinch his cheeks, and he had a pretty good time taking everything in. He was really well behaved and I was proud of him.

The next day we took a ride through the National Park and then drove another 3 hours back to Vegas with an increasingly unhappy two year old. She finally fell asleep and Little Guy fell asleep. I napped for a few minutes, so that was nice, too. We stayed at the Luxor, which was nice, but couldnâ€™t compare to our suite at the Aladdin. We spent the next day and a half checking out the sights. We got an M&M hat for little guy and he looks SO cute in it. We also bought some Star Wars M&M ornaments. Yes, weâ€™re a bit geeky! I will admit that we wanted to do the Star Trek Experience, but Little Guy couldnâ€™t go and the idea of waiting while the other person caught two 20-minute shows, was too much for us to contemplate.

So, to make a long story short, we checked out and flew home on Tuesday. It was a much shorter and less eventful trip, although I had my carry-on searched again for â€œsuspicious powderâ€ which just turned out to be baby formula. =}

Still not a fan of the destination wedding, although I do understand some of the reasons for having them. I will amend my previous comments to suggest that perhaps if your very good friends have a destination wedding, it would be thoughtful to consider waiting until the following year to schedule your own destination wedding so as to allow people to replenish their vacation time and bank account. That is, unless itâ€™s a plot to ensure no one can be there. In that case, by all means, make sure you pick the most expensive and remote spot you can findâ€¦ a safari in Zambia, for example, and go for it!

More than Mommy is the exploration of the many sides of being a woman and mother. In my case, this includes family, business, home, humor, hobbies, and occasionally politics.

If you're looking for a reminder that you still have a name of your own, you've found the right place! Please post a comment, make yourself comfortable, and maybe learn something new. Parenting is fun, but quite a bumpy ride!